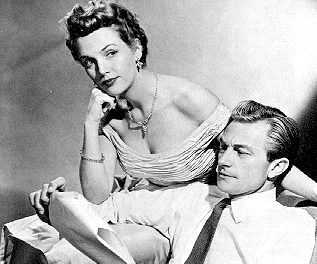 Mr. and Mrs. North was a radio mystery series that aired on CBS from 1942 to 1954. Alice Frost and Joseph Curtin had the title roles when the series began in 1942. In 1946, Mr. and Mrs. North received the first Best Radio Drama Edgar Award from the Mystery Writers of America. In 1953 Barbara Britton and Richard Denning took over the roles of Mr. and Mrs. North.

Reviewer: AMC Hornet - favoritefavoritefavoritefavorite - February 16, 2016
Subject: There wasn't a weekly "show" like many other OTR programs.
The Mr. and Mrs. North shows popped up irregularly. They were interesting enough for me to check out the source - the books by Richard and Frances Lockridge.

The books are much better than the radio programs - the quirky, playful dialogue, only hinted at in the radio programs, gets much more emphasis in the books. And the setting - New York City in the 1940s to early 1960s is something to be savored, like the very cold martinis with lemon peel that the Norths drink every chance they get.

Not great mystery novels - but very enjoyable, amusing and relaxing. They will make you nostalgic for a New York City that is no more.

Here are the books:

The Norths Meet Murder (1940)
Murder Out of Turn (1941)
A Pinch of Poison (1941)
Death on the Aisle (1942)
Death Takes a Bow (1943)
Hanged for a Sheep (1944)
Killing the Goose (1944)
Murder Within Murder (1946)
Untidy Murder (1947)
Payoff for the Banker (1948)
Murder Is Served (1948)
Death of a Tall Man (1949)
The Dishonest Murderer (1949)
Murder in a Hurry (1950)
Murder Comes First (1951)
Dead as a Dinosaur (1952)
Death Has a Small Voice (1953)
Curtain for a Jester (1953)
A Key to Death (1954)
Death of an Angel (1955)
Voyage into Violence (1956)
The Long Skeleton (1958)
Murder is Suggested (1959)
The Judge is Reversed (1960)
Murder Has Its Points (1961)
Murder by the Book (1963)
Reviewer: harron68 - favoritefavoritefavorite - February 9, 2016
Subject: Warm Norths
I first heard this series in the '70s and was taken in by the combo of light romance, danger and mystery. Now, time has taken its toll and tho still good, shows its age.
Reviewer: Junior50MI - favoritefavoritefavoritefavorite - September 4, 2015
Subject: A True Professional?
I am not sure if people realize that Archive.org is run by volunteers. All professionals in their own right. After listening to a few of these stories I do agree they need some work. I re-processed one episode just to balance out those highs and lows on my own computer. I appreciate the fact that these programs need work, maybe one could volunteer to upgrade these programs. And then upload them here? I watched Mr. and Mrs. North when they were rebroadcast on of all places Christian television and was very happy to find the radio shows on here. I will download the whole set and see if there isn't any way to clean them up and send them back here. If I have the time that is.
Reviewer: Vitold Ravinsky - favoritefavorite - March 29, 2014
Subject: Good Shows, But Terrible Sound Transfer
Can someone step up to the plate and process the poor audio transfers? It runs the otherwise great shows. The levels are all over the place: very low or very high. Then very muddy or very shrill.